In the concert performed in the village square of the Kytherian village of Milopotamos on August 26, 2001, Panayotis Leftheris – “Catelouso” presented music and songs composed between 1983 and 1993. The common characteristic of   these pieces is the undefined feelings of a young man, living abroad, about his homeland.  Through music he approaches the essence of what he misses - nature, people, the light, the wind...  “Catelouso” found common ground in the work of some fellow Kytherian poets and writers, some of them long dead. He borrowed their voices from recording archives and used them in the short sound passages between the songs and melodies, believing that, even without understanding what they say, their truths are evident in the quality of their voices.

We present exerpts from the live concert of 2001.  A new studio recording version of Song of the Sirens will soon  be released on CD from KYTHERIOS MUSIC. 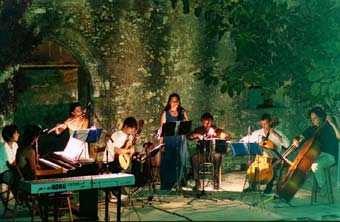