The Athenian Youth Symphony Orchestra Concert.The Athenian Youth Symphony Orchestra (ASON) is one of the most active music ensembles in Greece today. Their contribution to contemporary music in Greece is both artistic and educational. ASON is a full symphonic orchestra made up mainly of music students. It was founded in 1996, and since then has given many concerts all around the country. They have collaborated with many professional soloists and have commissioned new works by contemporary composers. They give concerts in a great variety of places, from old pizza houses (Kythera 2002), to large music halls (Athens Megaron 2006, 2007). The initiator and moving power behind the orchestra is its conductor, Professor Pavlos Serghiou. He contributes most of his free time to this project and he is in constant battle with the organisational difficulties that beset modern Greece. The orchestra  has no state financial contribution and survives thanks to private donations. With the support of its members and its funds, ASON contemplates the future with confidence.

The island of Kythera is proud to have been one of the first places outside Athens to host the orchestra.  This took place in July of 2002 when orchestra performed for the very first time a piece specially written for them, “Mnemes” by composer Panayotis Leftheris.  They took the ensuing summer rain and the free fall of a vibraphone from a pick-up van in their stride.  It was the first time that a full symphony orchestra had performed  on the island  and the programme was, in addition to “Mnemes”, Prokoviev’s “Peter and the Wolf” and “A Simple Symphony” (op.4) by Benjamin Britten. The concert took place in Agia Pelagia and was supported financially by the municipality of Kythera, the Kytherian Church and the shipping company ANEN. 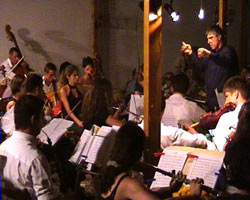